Intellectual Property Role of the Judiciary

Intellectual Property Role of the Judiciary

Dr. Sudhir Ravindran is a Patent Attorney and CEO of ALTACIT GLOBAL – Strategic Consultants for Intellectual Property & Franchise. A graduate Mechanical Engineer from the University of Madras, India, Masters in Manufacturing Systems Engineering from the Warwick Manufacturing Group, UK and a Masters in Law from the School of Law, University of Warwick in International Economic Law. He can be reached at [email protected].

Intellectual Property (IP) law protects some of the finer manifestations of human achievement. IP has gained much significance in recent times. This is because IP is a major asset for individuals and corporations. Globalisation increased the interactions between countries that resulted in the exposure of IP. Due to the lower levels or at times the lack of intellectual property protection and difference in various national legislations, developed countries were losing out on their IP and were looking for an effective enforcement tool. During the Uruguay Round of negotiations of General Agreement on Tariffs & Trade (GATT), which began in 1983 developed countries managed for the first time to link trade and intellectual property.

One of the main results of the Uruguay Round negotiations that concluded in 1994, with the establishment of the World Trade Organization was the Trade Related Intellectual Property Rights (TRIPs). The TRIPs Agreement was the most far-reaching international instrument ever negotiated on intellectual property rights. India, which is also a member of the TRIPs bound by this commitment, has made substantial changes to its IP laws.

India with its excellent educational infrastructure has a reservoir of scientific & artistic talent. The exploitation of the same during Information Technology Revolution resulted in substantial economic gains. IP laws are driving force in the protection of these new knowledge and ideas.

The answer to the question as to whether the judiciary should have in-depth knowledge of IP is best illustrated in the below stated two quotes: “The Courts… decisions often shape the course of our nations life…”[1] The same was said by the leading international jurist Archibald Cox in his book The Court and the Constitution. The role of an independent judiciary is one of the democratic pillars of our Indian constitution. The judiciary decisions sets precedence and therefore it is important that the judiciary be acquainted with the laws and its implications. Thus it is imperative that the judiciary have in-depth knowledge of IP.

“Mankind constantly progresses in culture… Only when based on this foundation can the requirement of the law be recognised as the requirements of the advancing culture which law is to serve; and only in this way can the true aim of the law be known for what it is”[2] Sir C.K. Allen in his book “Law in the Making” states the need for the judiciary to lay a strong foundation. This foundation can be achieved in the field of IP by the judiciary having in-depth knowledge of IP.

The judiciary plays two distinct roles in relation to IP:

1. Interpretation of the various of IP Statutes. India under its commitment under the TRIPs has introduced many IP legislations to modernise its age-old IP legislations in order to be in harmony with the international laws. These news laws bring about a lot changes in the existing IP laws and in certain instances totally new legislations have been put in place[3]. These new laws modifying existing provisions or introducing new provisions have been rushed through without weighing the long-term implications of such legislations. The judiciary would have an important role in interpreting these news laws if any conflicts arise with other existing statutes. 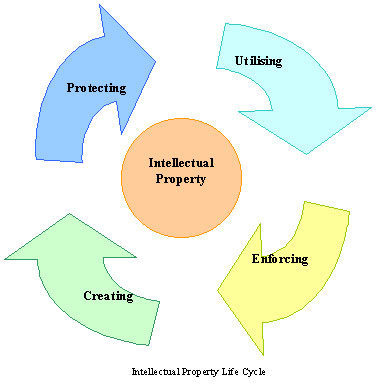 The four stages of the life cycle as illustrated are:

The judiciary has an important role to play in each of the four stages in the IP life cycle.

Role of Judiciary in Creating IP

The judiciary actively contributes in the first state by enforcing Contractual Obligations arising out contracts dealing with IP. It is important to note that the Article 300-A [4] of the Constitution of India guarantees that no person shall be deprived of property, which in relevance to IP ensure the right of the inventor/author over his or her invention/work. All such contractual agreements that deal with the transfer of IP are also governed under the Indian Contracts Act. Disputes often arise over the ownership of IP.

Role of Judiciary in Protecting IP

The second step in the IP Life cycle is the protection of IP that is created. There are different forms of IP Protection available in India:

Role of the Judiciary in Protecting IP

All the above listed forms of IP protection are implemented by means of respective Statutes like the Indian Patents Act, The Indian Trade & Merchandise Act etc. Theses Statutes that protect the individual IP tools have established Quasi-Judicial Authorities & Bodies like the:

All these officers are conferred with various statutory powers for the discharge of their functions. In respect of certain matters they have the powers of a Civil Court besides vast discretionary powers conferred by the specific Acts.

Appeal lies against any order or decision of the Registrar/Controller to the respective Appellate Boards. In case of failure on the part of the authorities in discharging their duties or any arbitrary decisions in excess of their powers, judicial remedies can be sought.

The judiciary before entertaining any matter in this regard it must be ensured that the appellant/plaintiff has fully exhausted other available statutory remedies as provided in the respective Acts before approaching the Court.

Role of the Judiciary in Utilising IP

The third stage in the IP Life Cycle that is Utilising and strategically exploiting IP may involve licensing and cross-licensing arrangements, assignments, transfer of property etc. Legal implications arise out of such instances. Provision of statutes like the Indian Contracts Act, Indian Stamp Act, Transfer of Property Act etc. are applicable to the licensing arrangements. The courts role in this regard also relates to the disputes arising of IP Contracts.

The Indian Patent Act provides for remedies against the abuse of the monopoly rights granted under a patent. Three types of compulsory licences are:

In spite of the grant of a compulsory licence if the reasonable requirement of the public remains unsatisfied or that the patented invention is not available to the public at a reasonable price, the Controller of Patents may revoke the patent. Compulsory Licences are also available for copyright under the Section #2 A of The Copyright Act to reproduce and publish works at a reasonable price. All such decisions by the quasi judicial authorities can be appealed in courts.

Role of the Judiciary in Enforcing IP

Passing off action arises in cases of an unregistered trademark.

Infringement of copyright in a design (Sec 22 (1))

Principles/Tests of Infringement of Intellectual Property

Courts follow certain principles/tests to ascertain the alleged infringement. These tests have evolved from preceding case and principles put forth by eminent jurisprudents.

Remedies for Infringement of Intellectual Property

The judiciary should ensure that the remedies for intellectual property infringement consists of should sufficient punishment so as to cause deterrence of wrongful activity. Deterrence is crucial since violations of intellectual property rights often involve no loss of tangible assets and do not even require any direct contact with the rights holder, the rights holder often does not know it is a victim until a defendant’s activities are specifically identified and investigated.

While an IP issues is brought before a court, there arises some jurisdictional issues relating to the initiating of suits for infringement of IP:

Imprisonment (Under sections 63-67 of The Copyright Act) Civil & Criminal Remedies are distinct and independent and can be availed simultaneously.

When a court has to forma an opinion upon a point crucial to a case and pertaining to technology or art the opinion of that of an expert can be sought by the court under Section 45 of the Indian Evidence Act. Further it should be noted that the provisions of The Arbitration & Conciliation Act are also applicable to all IP disputes.